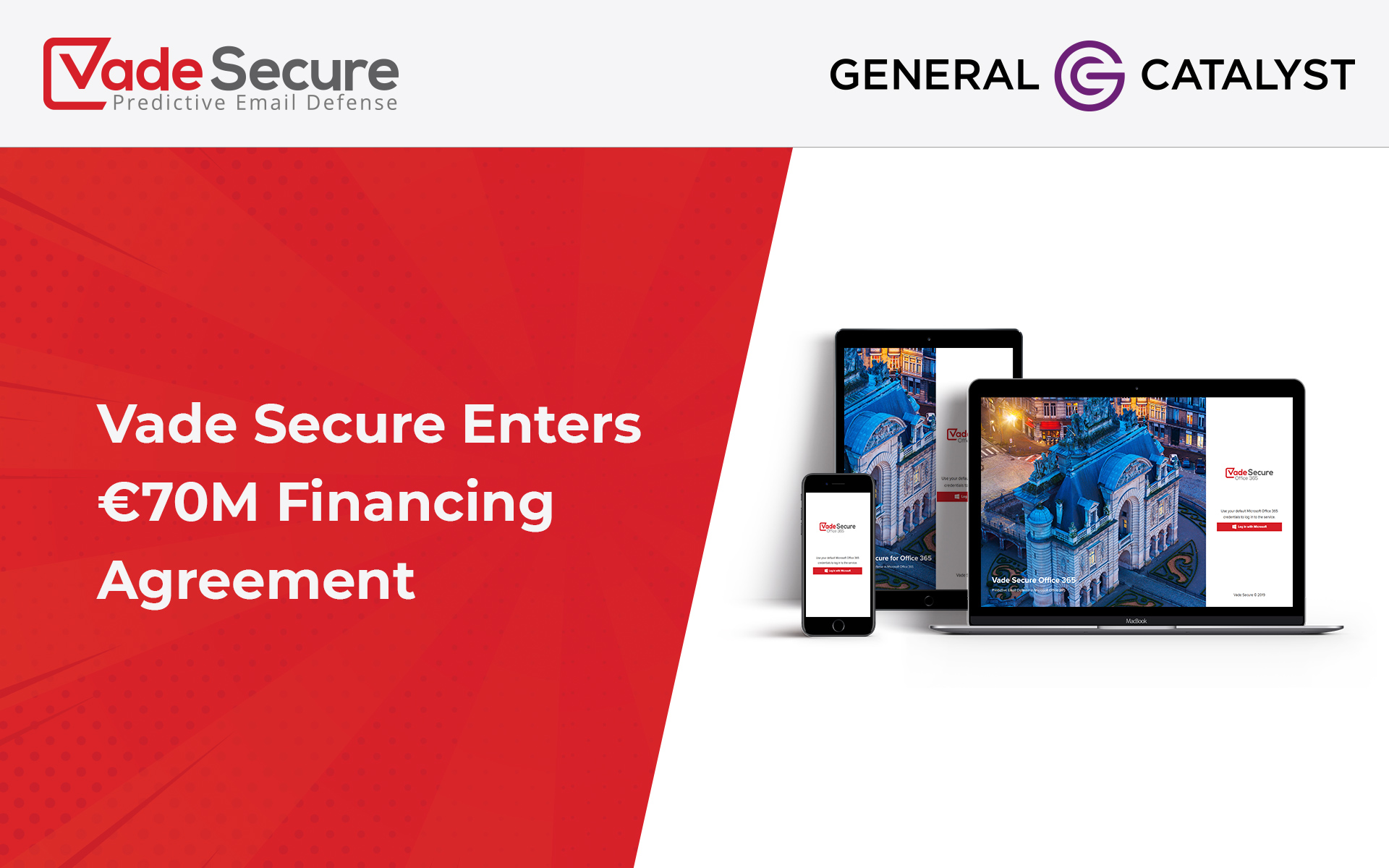 the global leader in predictive email defense, announced that it has entered a
€70M financing agreement with General Catalyst. Vade Secure plans to use the new funding to accelerate its growth and global expansion, with a focus on building out a
go-to-market strategy focused on servicing business customers through Managed
Service Providers (MSPs). The company will also invest heavily in advancing the
platform's core machine learning-based threat detection capabilities as well as
its native email security solution for Office 365.

The investment builds upon Vade Secure’s track record of hypergrowth and international expansion over the last four years, with major deals across North America, Europe, and Japan. It follows on the heels of a flurry of industry awards and recognitions that Vade Secure has earned for its Vade Secure for Office 365 product.

Email continues to be the #1 attack vector, resulting in a proliferation of targeted phishing, spear phishing, malware, and ransomware attacks globally. According to Accenture, the total economic value at risk of cybercrime attacks is $5.2 trillion over the next five years. Vade Secure protects enterprises and small-medium businesses (SMBs) against email-borne cyber threats targeting their employees. Today, the company’s technologies protect more than half a billion inboxes across 5,000+ global customers, including major ISPs, OEMs, and enterprises, such as Comcast, British Telecom, Orange, Softbank, Fujitsu Cloud
Services, NTT Comm, Telstra and Cisco.

“Since implementing Vade Secure we have gone from spam being a number one problem to having it well under control. Previously, we had daily calls to discuss unwanted and malicious emails, whereas we now have just one weekly of which this is just one part of the agenda,” said Simon Dawes, Head of Email, Identity & Customer Data Security, BT. “The visibility delivered by Vade Secure’s email categorization is providing powerful insight into what kind of threats are targeting our customers’ inboxes. This intelligence helps to inform our overall security strategy as it continues to evolve.”

Looking ahead, Vade Secure will continue to serve the enterprise and OEM markets. In addition, Georges Lotigier, Vade Secure’s CEO, and his team intend to greatly expand on Vade Secure for Office 365 with a go-to-market strategy focused on selling through MSPs and aggregators to service SMBs across North America, Europe, and Japan.

Compared to its competitors, Vade Secure for Office 365 provides superior detection of targeted email attacks and unknown, signature-less threats. The company leverages threat
intelligence from its half a billion protected mailboxes globally to train and continually refine highly accurate machine learning models, resulting in far lower false positive/false negative rates and unique graymail classification capabilities. Moreover, due to its native integration with Office 365, Vade Secure for Office 365 is easy to deploy (no MX changes), easy to use (no external quarantine), and easy to manage, making it attractive to both MSPs and their SMB clients.

“I am truly excited about this investment from General Catalyst. It validates our strategy and, more importantly, allows us to accelerate our goal to revolutionize the email security market through the application of machine learning and a comprehensive view of threats as they emerge in real-time worldwide,” said Georges Lotigier, Vade Secure’s CEO. “With
the funding, we will continue to invest in our AI-based threat detection engine and build on Vade's leadership in email security for ISPs. In addition, we have a unique opportunity to capitalize on the market disruption caused by the industry shift from on-premise hosted email to the adoption of cloud-based email platforms. With a significant advantage in our core technology and easy-to-implement solution, we plan to rapidly become the de facto standard for Office 365 email protection, in a complement of the platform’s own security.”

As part of the financing agreement, General Catalyst investors, Paul Sagan (Former CEO of Akamai Technologies) and Matthew Brennan, will join Vade Secure’s Board. General Catalyst has invested heavily into the cybersecurity category over the years, including Ping Identity (acquired by Vista Equity Partners in 2016) and Imprivata (which went public and was subsequently purchased by Thoma Bravo).

“As an entrepreneur who built Datto from the ground up into a multi-billion dollar business, I lived and breathed MSPs. From the moment I first saw Vade Secure, I realized the company’s immense potential to be an essential piece of solving cybersecurity for MSPs. The instantly deployable O365 protection is the perfect mix of enterprise-grade security and total automation that today's MSPs need.”

Stephan Dietrich, General Catalyst Executive-In-Residence, Co-Founder/CEO of Neolane, Inc. (acquired by Adobe), and current Vade Secure Board Director, will co-invest alongside General Catalyst and remain on the company’s Board to serve as Chairman.

“As a Board Member over the past two years, I witnessed Vade Secure's tremendous growth and technological advances first-hand,” said Stephan Dietrich, General Catalyst Executive-In-Residence (XIR). “I knew that it was the right time to unlock the company's full potential by assembling the right growth equity partner and a 'dream team' of talent. I am happy to serve as Chairman of the Board, and I look forward to taking Vade Secure to the next level by further contributing with my Europe-to-US expansion expertise.”

Vade Secure and General Catalyst are thrilled to forge this new partnership to fulfill Vade Secure’s mission to keep businesses around the world safe from email-based cyber attacks.

For more information, visit www.VadeSecure.com and follow the company on Twitter @VadeSecure or on LinkedIn at https://www.linkedin.com/company/vade-secure/.

General Catalyst is a venture capital firm with approximately $5B in total capital raised that makes seed through growth-stage investments. We back fearless entrepreneurs with the potential to build foundational enterprise technologies and ubiquitous consumer brands. With offices in San Francisco, Palo Alto, New York City, and Boston, our portfolio companies benefit from a bicoastal network of talent, customers, and opportunity. For more: www.generalcatalyst.com.