Why MSPs Are Moving to Standardized Bundled Services

Selling and managing Microsoft 365 is a no-brainer for MSPs, but the resulting margins are less persuasive. For many MSPs, the solution is to offer added value beyond Microsoft 365 with complementary software and services. A la carte offerings, however, can add complexity, not to mention time and resources. Bundled services is the answer for many MSPs.

The explosive growth of Microsoft 365

Microsoft 365, already the most popular business software suite before COVID-19, saw 19 percent revenue growth in the three-month period ending on June 30 2020. MSPs experienced this firsthand, finding themselves in the unique position of having more than enough work during the initial lockdown phase. Clients needed to get work-from-home ready and fast.

Microsoft Teams saw a single-day high of 200 million meeting participants during that time. In the words of Microsoft CEO, Satya Nadella, such growth constituted “two years of digital transformation in two months.”

Bundling Microsoft 365 with complementary software and services does just that. A la carte services, although a good fit for some MSPs, can create added complexity for others. Standardizing the offering simplifies the process for both MSPs and clients.

For MSPs, a standard offering that can be rolled out to new clients and the existing client base simplifies both selling, deployment, and management. For example, a standard offering could include Microsoft 365, plus backup, recovery, and email security. Unlike the a la carte model, this bundle, and its associated vendors, would be standard across the board.

This eliminates the need to sell the client on each individual product and service; in fact, it eliminates the need for the MSP to even specify what is in the bundle. Positioning the service as a multi-solution offering that meets all the client’s needs is far more compelling than telling a client they need five to seven a la carte solutions and services and going into minute details that clients likely will not fully understand.

Clients look to their MSPs to make IT-related decisions. Putting the onus on clients runs the risk of clients making decisions based solely on costs. Choosing from an a la carte selection of products and services can be daunting, not to mention confusing. Think of it like a restaurant menu: for customers, a large menu creates difficult decisions; for restaurants, a large menu requires carrying and managing more product, and often, creating more waste.

Admins also benefit from a standardized bundled services offering. With the a la carte model, admins must be proficient on numerous software and systems. By scaling down, standardizing, and sticking with a select few, admins have the opportunity to become real experts on those systems, rather than proficient. This also helps MSPs: fewer systems require fewer expert resources.

The above example of a bundled service offering for Microsoft 365 includes backup, recovery, and email security, but MSPs can expand on those services with additional offerings. Security offerings are particularly suited to Microsoft 365 for two reasons. First, Microsoft is the most impersonated brand in phishing attacks. Second, security is the top driver of revenue growth for MSPs. According to Kayesa’s 2019 MSP Benchmark Survey, two-thirds of respondents to the survey reported revenue increases from managed security services, and 75 percent offered Microsoft 365 managed services.

When choosing software and services to add to your bundle, consider the resources you currently have and whether you have the experts on staff to manage them.

Complex solutions require time and resources, so low touch solutions that are easy to deploy and manage are optimal for MSPs. Vade Secure for Microsoft 365 was developed with this in mind. Its API-based architecture makes it easy to bundle and requires no complex setup or configurations and no MX record change. Additionally, integrated features, including Auto-Remediation and automated phishing awareness training, empower MSPs to add value to their service offering without incurring the added costs of third-party platforms. 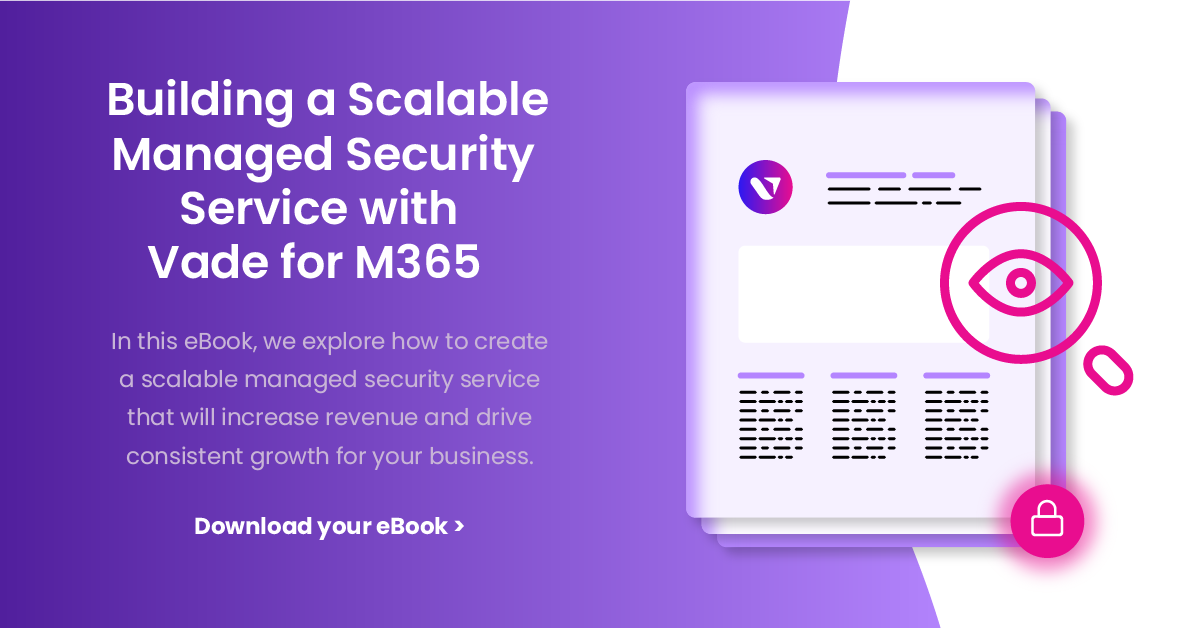 How to Incorporate Vade for M365 Into Your MSP Security Stack

Cybersecurity is everyone’s responsibility, but the public puts their trust in managed service providers (MSPs) and IT professiona...

How to Make Your MSP Stand Out as a Cybersecurity Leader

Security has become the key focus of the IT channel in recent years. Increasing cyberattacks and looming security regulations have...